Bill of Rights Article [I] Congress shall make no law respecting an establishment of religion, or prohibiting the free exercise thereof; or abridging the freedom of speech, or of the press; or the right of the people peaceably to assemble, and to petition the Government for a redress of grievances.

At the NEA event, President Johnson warned of the the potential issues of state sponsored art. “We fully recognize that no government can call artistic excellence into existence.  It must flow from the quality of the society and the good fortune of the nation.  Nor should any government seek to restrict the freedom of the artist to pursue his own goals in his own way… But government can seek to create conditions under which the arts can flourish.”

In 1973, the United States Supreme Court established what is obscene and what is not obscene. The works of artists are not obscene because they have been established to have serious artistic value.

“1. Obscene material is not protected by the First Amendment. Roth v. United States, 354 U.S. 476, reaffirmed. A work may be subject to state regulation where that work, taken as a whole, appeals to the prurient interest in sex; portrays, in a patently offensive way, sexual conduct specifically defined by the applicable state law; and, taken as a whole, does not have serious literary, artistic, political, or scientific value.”

Excerpt from “Behind the right’s loathing of the NEA: Two ‘despicable’ exhibits almost 30 years ago” by Travis M. Andrew in The Washington Post.

Conservative Sens. Jesse Helms (R-N.C.) and Alphonse D’Amato (R-N.Y.) took to the Senate floor in May 1989 “to question the NEA’s funding procedures.” Helms called Serrano “not an artist, he is a jerk,” and D’Amato theatrically tore a reproduction of the work to shreds, calling it a “deplorable, despicable display of vulgarity.”

Meanwhile, more than 50 senators and 150 representatives contacted the NEA to complain about the exhibits.

Serrano still remembers being “shocked” by the angry reaction and, he told The Post on Sunday, how suddenly the work became a “political football.”

“I was born and raised a Catholic and have been a Christian all my life,” he said. “My work is not meant to be blasphemous nor offensive. … It was very surreal to see myself become the object of a controversy and national debate I did not intend.”

Open this page to the view the works of Robert Mapplethorpe. Note: The page features nudity.

Mr. President, I have tried, without success, to establish in my own mind when, if ever, the liberal news media of America have engaged in more distortions of the truth than in the public discussion of the National Endowment for the Arts. The media have, in fact, been obsessed for at least 5 years, to my knowledge. They have been obsessed with trying to prove that black is white and white is black, and that disgusting, insulting, revolting garbage produced by obviously sick minds is somehow art, and that this art is worthy of being subsidized and rewarded by and with grants of Federal funds–the taxpayers’ money, mind you–distributed by the National Endowment for the Arts.

The Mapplethorpe exhibit, which had also received NEA funding, got swept up in that obscenity controversy a few weeks later, when Congress found out that “The Perfect Moment”—which included photographs of very explicit sexual acts in addition to pictures of flowers and formal portraits—was about to open at the Corcoran. Fearing protests and loss of funding, the Corcoran’s director had decided to cancel the exhibition with less than three weeks to go before its opening.

Excerpt from “Whipping up a storm: how Robert Mapplethorpe shocked America” by Kevin Moore in The Guardian

Two interim venues later, The Perfect Moment hit a different political wall at the Contemporary Arts Center (CAC) in Cincinnati, where several national anti-pornography organisations were headquartered and local law enforcement was known for its vigorous prosecution of obscenity since the 1970s. Taking notice of the events in Washington, a local organisation called Citizens for Community Values (CCV) launched a letter-writing campaign to try to block the exhibition. In the weeks before the exhibition’s opening, on 7 April 1990, protests were staged on both sides. The local media added a third ring to the circus, relaying not only events and public opinion but also educating viewers on the fine points of Ohio obscenity law, the first amendment, the nature of art, homosexuality, the Aids crisis and sex acts most viewers never dreamed existed.

The conflict came to a head on the day of the show’s opening, as lawmakers issued indictments against the CAC and its director Dennis Barrie on charges of pandering obscenity for pictures of homoerotic acts and the illegal use of a minor in nudity-oriented material. Five photographs ultimately formed the basis of the trial, which occurred four months later, after the exhibition had completed its full run with record-breaking attendance of more than 80,000 visitors. (Two pictures of nude children were eventually thrown out when the mothers signed statements saying they had authorized the photographs and their use.)

In a twisted “what if”, the CCV had ill-advisedly generated a mass mailing containing examples of the so-called pornographic works – among them, the artist’s self-portrait with a bullwhip in his anus, a man urinating in another man’s mouth and several pictures not even by Mapplethorpe. As WCPO TV reporter Stephen Hill pointed out, if the jury were to declare the works obscene, CCV could have faced similar charges for distributing obscene material through mail. Another mischievous journalist noted that the very same pictures in question were freely available for viewing in town at the public library and in numerous bookstores and those institutions were not being prosecuted.

The jury, selected because members had not seen the exhibition and had never visited an art gallery or museum, was asked to decide whether the photographs were obscene or art based on consideration of the five pictures alone, without any exposure to the other 120 photographs in the exhibition.

After less than two hours of deliberation, the jury acquitted Barrie and the CAC on all counts, determining that the photographs were indeed art and therefore not obscene. While Mapplethorpe’s personal definition of art delighted in the duality of artistic merit and obscenity (he briskly referred to his work as “smut art”), luckily for the defendants, US law marks an absolute separation between the two. 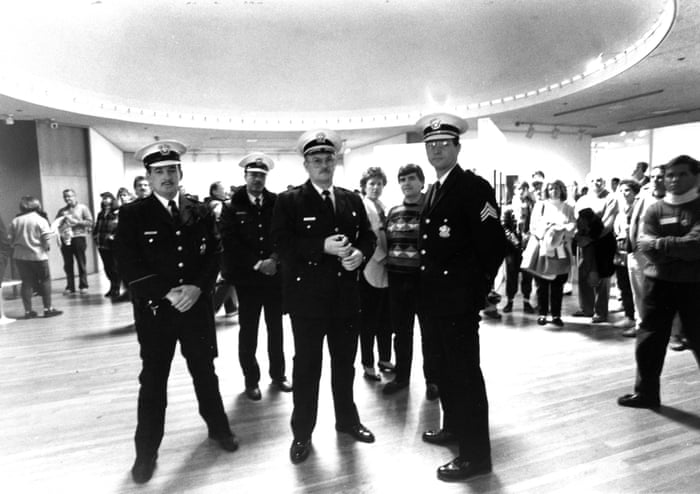