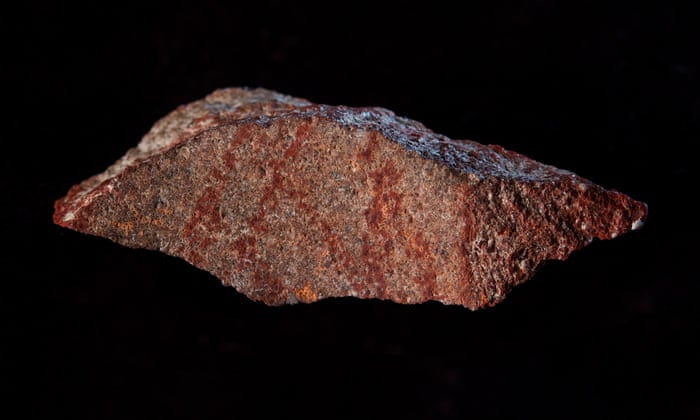 “According to researchers who unearthed the piece, it is the earliest known drawing in the world. Archaeologists found the marked stone fragment as they sifted through spear points and other material excavated at Blombos cave in South Africa. It has taken seven years of tests to conclude that a human made the lines with an ochre crayon 73,000 years ago.”
https://www.theguardian.com/science/2018/sep/12/earliest-known-drawing-found-on-rock-in-south-african-cave

According to Pliny, the ” origin of Painting is uncertain,” yet “all agree that it began with tracing an outline around a man’s shadow and consequently that pictures were originally done in this way.”

“On painting we have now said enough, and more than enough; but it will be only proper to append some accounts of the plastic art. Butades, a potter of Sicyon, was the first who invented, at Corinth, the art of modelling portraits in the earth which he used in his trade. It was through his daughter that he made the discovery; who, being deeply in love with a young man about to depart on a long journey, traced the profile of his face, as thrown upon the wall by the light of the lamp. Upon seeing this, her father filled in the outline, by compressing clay upon the surface, and so made a face in relief, which he then hardened by fire along with other articles of pottery. This model, it is said, was preserved in the Nymphæum at Corinth, until the destruction of that city by Mummius.’
The Natural History. Pliny the Elder. John Bostock, M.D., F.R.S. H.T. Riley, Esq., B.A. London. Taylor and Francis, Red Lion Court, Fleet Street. 1855.

The following is from the J. Paul Getty Museum
http://www.getty.edu/education/teachers/building_lessons/formal_analysis.html

Elements of Art
The elements of art are the building blocks used by artists to create a work of art.

Line is a mark with greater length than width. Lines can be horizontal, vertical, or diagonal; straight or curved; thick or thin.

Shape is a closed line. Shapes can be geometric, like squares and circles; or organic, like free-form or natural shapes. Shapes are flat and can express length and width.

Color is light reflected off of objects. Color has three main characteristics: hue (the name of the color, such as red, green, blue, etc.), value (how light or dark it is), and intensity (how bright or dull it is).

• White is pure light; black is the absence of light.

• Intermediate colors, sometimes called tertiary colors, are made by mixing a primary and secondary color together. Some examples of intermediate colors are yellow green, blue green, and blue violet.

Texture is the surface quality that can be seen and felt. Textures can be rough or smooth, soft or hard. Textures do not always feel the way they look; for example, a drawing of a porcupine may look prickly, but if you touch the drawing, the paper is still smooth.